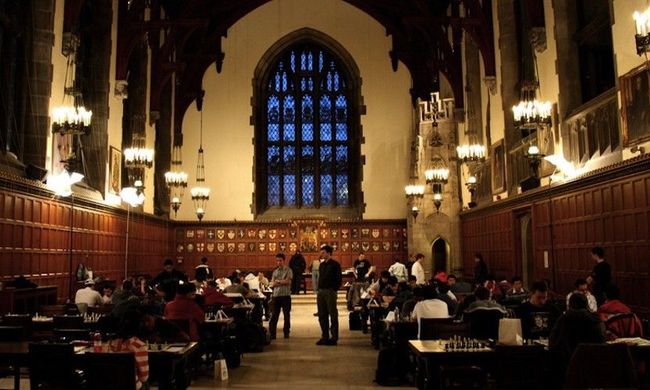 The Hart House Chess Club is the official chess club of The University of Toronto. Going on 122 years, it is one of the University’s oldest, most successful and highest profile clubs.

The Hart House Chess Club offers a friendly, cheerful, lively gathering place for chess players of all skill levels. We meet for casual play every Friday night from 4:00pm to 11:00pm in The Reading Room of Hart House. Players are always welcome to drop in anytime during the evening, learn a thing or two about chess and meet some new chess friends.

An annual Hart House Chess Club membership can be purchased by undergraduates or graduate students for $25 at The Hart House Hub. Members of The Hart House Chess Club are eligible to participate in our regular competitions and are given free entry in all special events that we hold including lectures and simultaneous chess exhibitions by some of Canada’s leading players. We also organize tournaments, beginner workshops, movie and pizza nights.

From the Club’s earliest days it has been focused on promoting chess to new chess friends and beginners. In keeping with this tradition we offer weekly chess lessons to novice players who want to learn chess or improve their game.

Another major commitment of the Club is that of promoting gender inclusiveness in chess. To that end the Club’s resolute efforts culminated in the election of its first female executive board member in 1976. That year also marked the beginning of increased women’s participation at the Club, be that as players, coaches or club administrators. From then onwards the Club’s naturally hospitable and welcoming environment did see more and more female members, teammates and executives, including an executive comprised of a majority of females in 2013-14, one of whom was the Secretary. Presently the Club can boast that the volume of female chess players continues to grow, and that it shows no signs of slowing.

As of 2018, Hart House Chess Club is one of the most popular and best-regarded chess spots in all of Toronto. Its friendly atmosphere, vibrant community and diverse membership has rightfully earned it its good reputation as the best and most open student chess club in Canada. Come, check us out and learn about the exciting world of chess!