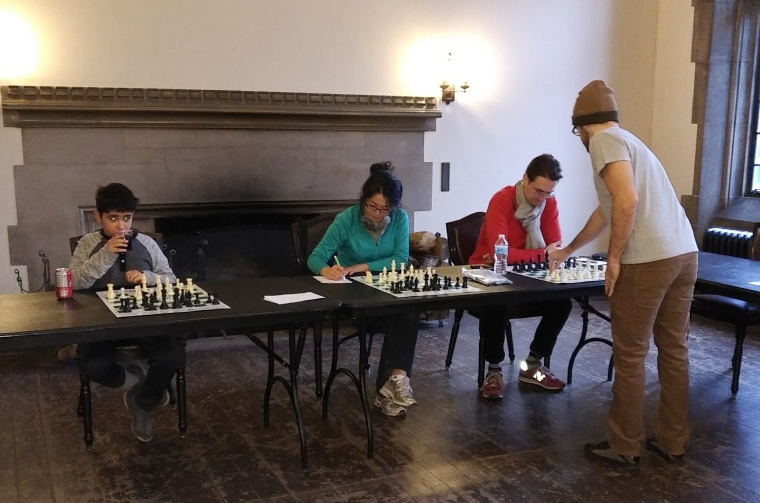 Fifteen chess enthusiasts, aged 12-65 years of age, sat down and challenged Panayoti in a simultaneous chess exhibition and more that 30 people stopped by to watch the games and have a taste of the delicious greek menu, kindly prepared by the Pan-Messinian Association and the Greek Students of U of T Association. The event took place at the beautiful Hart House East Common Room and the attendees had a chance to try some original Kalamata olive oil and watch some beautiful drone footage from the breathtaking beaches, islands and archeological sites of Greece!

After 3.5 hours of intense play, Panayoti managed to defeat Leslie Tang, the last player standing, thereby ending the event with a 15-0 score. However, the event was not over yet! Six UofT students, proved how much they loved chess by staying at Hart House for another 5 hours for post-mortem analysis of their games with Panayoti! A fullest Sunday evening indeed!

Panayoti, who is a graduate student at U of T’s School of Law, is coach, player and captain at the University’s Varsity Chess Team. He is former junior National Champion and has represented Greece in the 2005 World School Championships. We would like to thank him for leading this exhibition.

The event was co-hosted by the Pan-Messinian Association, the University of Toronto Greek Students Association and Hart House Chess Club, and we are hoping that our paths will cross again in the future!