Hart House Chess Club hosted its Spring Junior Open tournament from March 16th to March 17th, 2019. It was the second junior chess event organized by our club in two consecutive years and what a blast it was! Held in the elegant Debates Room with the arched ceiling, the event attracted 22 young participants who showed everyone their confidence and chess skills during the March break.

Divided into two rating sections, an U- 900 and an U-1300 section, with 11 players each, the tournament offered 5 rounds of classical chess (55′ + 5”/move) in swiss-system. The competition was remarkably intense, as can be demonstrated by the ties for the top 3 in each section.

In the upper section especially, with one round to go, there was a long list of players from which the winner could have come out! Joshua Lau and Mark Rozin were leading with 3 out of 4 points but Yinan Wang, Ivan Huang and Zi Liu were a hair’s breath away from the top with 2.5 points in 4 games.

This meant that Joshua Lau was sole first with 4/5, followed by Ivan Huang and Yinan Wang with 3.5/5 each. As the latter two had drawn their head-to-head game, the second tie-breaking criterion (opponent’s average rating) was decisive with Ivan Huang emerging on second place and the silver medal position! Lily Liu was also in a medal-winning position as she was the top girl in her section!

It’s also worth mentioning that the last round saw the best game of the U-1300, a spectacular victory by Sven Coat against Varun Pillai in the venomous Italian. After sacrificing two pawns Sven gained enough time in the opening to launch an unstoppable attack against his opponent’s king, checkmating him in the middle of the board.

In the U-900 section things looked a bit clearer at the top level. Nora Wu entered the last round with 4 out of 4, threatened only by Karma Pillai and Yiming Zhao who had 3 out of 4 each. Gordon Zeng and Charis Zhu were also fighting for medals, with 2.5 points each.

After a double-edged game with opportunities for both sides, Nora Wu managed to win her game against Karma Pillai, scoring a perfect 5 out of 5 score and clinching the gold medal position! Charis Zhu and Gordon Zeng also won their games against Yiming Zhao and William Johnson, respectively, so they tied for second place with 3.5 points out of 5. Curiously enough, in a mirror image of the upper section, Charis and Gordon had drawn their head-to-head game so the second tie-breaking criterion had to be used, which placed Charis Zhu second and Gordon Zeng third. As for the top-female player distinction, the shiny medal was awarded to the very resilient Katelyn Johnson.

As for the best game of the U-900 section, Jasper He and Charis Zhu must be very proud of their battle on Round 4. Their moves led to a slow and extremely positional game with opposite castles, where each side was fighting for the control of the center and the fast pawn expansion on the wing where the opposite king was. You don’t often see great strategic games like this between younger players.

The event organizers were delighted to introduce for the first time 11 beautiful digital boards in the competition, allowing the spectators to watch all the games live on-line! But March madness did not end with the live broadcasting of the games! With five national masters analyzing the games with the kids after each round, the excitement that swirled around the skittles room added even more to the enthusiasm of the day! A nice buffet of snacks and coffee was provided to the kids and the parents and a bulletin with the games of the tournament was sent out to all the participants for further review and analysis!

Of course, none of this could have happened without the very generous support of the UofT students, who volunteered a lot of their time and energy to boost the event. Weiwen Leung and Alex Ferreira were the event arbiters and did an excellent job running the pairings and providing the results, standings and tie-breaking criteria. The latter also took on the difficult task of the on-line registrations. Jimmy Bartha deserves some really high praise as he served as digital board operator in this first exciting trial! He was also the person who, with the aid of Sean Lei, Dmitry Choukov, Andrew MacMillan and Panayoti Tsialas, set-up the cables and the boards in the playing hall. Alyssa Rusonik, the incoming Communications Director of the club, was, once again, very efficient and exquisite in the handling of the on-site payments. Her ability to demonstrate leadership skills in every task she undertakes is outstanding.

The club incurred a huge debt to Zara Toyserkani, who was at the skittles room from the very first till the very last minute of the tournament, taking care of the buffet and making sure that the parents and the kids would have a great time throughout their time at Hart House. Of course a big shout-out goes out to National Masters Sean Lei, Tanner McNamara, Jonathan Yu and Zane Nasir and to ex-Varsity player Gary Huang, who labored really hard in the skittles room, analyzing the games of the kids, providing helpful chess instruction and encouraging them to improve game by game! The combination UofT students analyzing chess games with the kids in the skittles room was and remains the most popular feature of our junior tournaments! The award ceremony was led by the very talented incoming club treasurer Sean Lei, who was delighted to congratulate the winners in each section! Finally, the tournament was directed by Panayoti Tsialas, whom the club would also like to thank for making the photo gallery and the bulletin of the games.

It’s been a great pleasure for our club to organize its second Junior Tournament in two years. We are grateful to Hart House for providing us with all the assistance we need to run the event and, more than anyone else, we wish to thank all the participants and their parents for taking part in our tournament and supporting the official chess club of the students of UofT.

See you all in our next event! Until then, practice, play analyze, repeat! 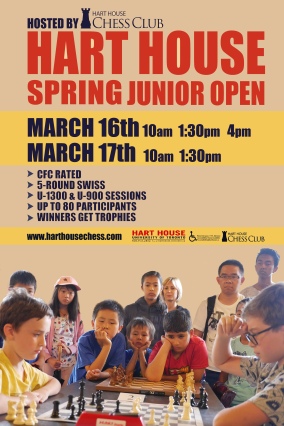